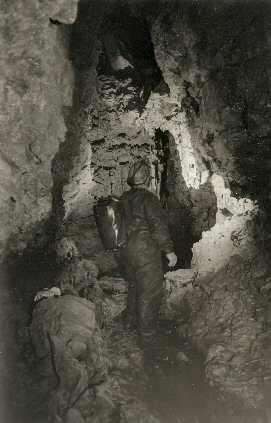 This cave on the western flank of Cader Fawr has a long association with Croydon Caving Club. Allan Ockenden wrote in Pelobates 45 Brown Porridge probably represented the best way of entering any system that might exist under this mountain. Allan also said that Brown Porridge had only received sporadic attention from members of Croydon C.C. due to their complete lack of success in passing the silted sump from which the cave gets its name. Another reason for the cave's lack of popularity was the rigorous nature of the entrance passages: the flat out wet squeezes of the dodgy looking entrance choke, the tight phreatic tube beyond and finally a very awkward rift squeeze which at last brought you out into the spacious though short-lived main passage.

Descent said that the cave was discovered by Westminster Speleological Society though I have also heard that it was discovered be some cavers from Cardiff University. This group were reportedly involved in an attempt to dissolve away the rock of the sump pool, sulphuric acid was accidentally spilled onto a nylon rag, releasing noxious fumes. An extremely quick exit must have been made!

My involvement with Brown Porridge began when I started caving in the late 1980's. As usual, efforts centred on trying to pass the silted sump by trying to bail it back into a 'paddling pool' construction. One failed attempt to do this was made more memorable by a photograph taken by Bernard Charlesworth. I had just tried to free-dive the Brown Porridge sump. This, however, had ended in complete failure. The only thing I had been successful in doing was covering myself from head to foot in mud. The mud had obscured all of my features, except my eyes and smiling teeth. My muddy blob of a body blended perfectly with the cave. There I was floating in the middle of the passage like a troglodyte Cheshire cat.

Things went from bad to worse when we realised on exiting that Jon Young, who on leaving early, had gone back to the cottage with Bernard's car keys.

The sump seemed to be putting up some fierce opposition so we decided to attack a tight phreatic tube which seemed to be trending in such a direction that it might bypass the silted sump-see survey. Paul Stacey made an initial trip, this time armed with lump hammer and chisel. On that trip we managed to ferret down the tube for a couple of body lengths before it tightened up. I realised at this point that if we were going to make significant progress, we would have to return with something with a bit more poke than a hammer and chisel.

In 1995 I returned with battery, drill and also very importantly some Soundless Breaker (SLB). Somehow I had managed to convince Tony White that carting all the gear through the dire entrance series was a worthwhile activity. Finally reaching the dig site I managed to set off a couple of charges. However, after clearing the spoil it became clear that a lot more enlargement would be required. Rather alarmingly, as a result of the SLB bang most of the cave filled up with fumes. As you can imagine, I made a fairly rapid exit.

Now ten years after my last visit to the cave and some thirty years after the cave was discovered, I can finally say that progress has been made. 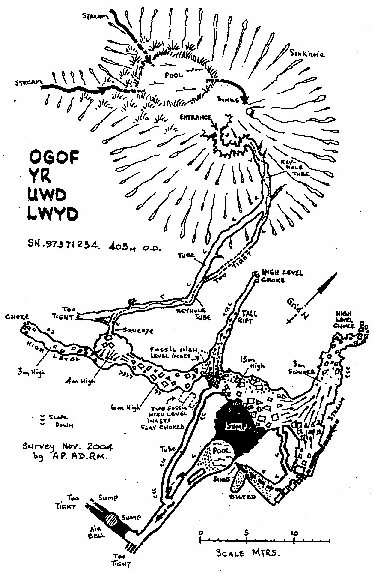 Initially mentioning to Tony Donovan and Roy Morgan about the potential of the site, a trace was carried out with optical brightener to see the resurgence point of the water that sinks at the entrance. It had always been assumed that the water in the cave might flow north to the Hepste River, possibly resurging near Moss Risings, a straight line distance of about a kilometre.

However, check bags placed at Moss Risings and also along the length of the Hepste River all showed negative. The only site showing positive within 24 hours was Ogof Afon Hepste, some four kilometres distant and about 170 meters lower than Brown Porridge. It seems likely that water entering Brown Porridge follows the dip of the beds to the south and then is conducted down the Coed Hir fault which cuts through the Hepste River near Ogof Afon Hepste. Whether we can follow the water from sink to resurgence is open to conjecture.

Brown Porridge had sprung from being a mildly interesting site to one of more potential and we decided to start reworking it. The only problem was that since my last visit in 1995 the entrance had collapsed in a fairly major way. Nothing about the entrance choke looked familiar. A large block had detached itself from the ceiling, the stream had backed up against it and deposited many years worth of debris, obscuring the original entrance crawl. However, with the offending block removed and much scaffolding inserted, the small phreatic tube beyond was finally gained. After a bit more work in the entrance crawls the main passage was finally gained in November 2004.

After surveying (resurveying?) the cave Tony and Roy have started to attack the small tube initially worked back in 1995. Attack is the right word as it has now received a lot of chemical GBH - so much so that it managed to shake down about a tonne of blocks from the roof of the main passage. Fortunately we were not standing under them at the time!

Lying in the excavated crawl trying to coax the bang debris into the dig tray, we could hear the occasional rather ominous watery glooping sound. It seemed to indicate that we were approaching a sump. Over Christmas we were proved right when Adrian Clarke, on a flying visit to the cave, managed to squeeze feet first down the continuation of the tube and gain a small stream passage. Downstream the water disappeared after a matter of feet into a small sump/duck. The upstream continuation was eventually gained by Roy and Tony after a bit of digging out. This was pursued for some ten meters to a larger pool/sump - the source of the glooping sound heard in wet weather. Looking at the survey it seems likely that this is the downstream side of the original 'Brown Porridge' sump.

After this small breakthrough the cave seems to be putting up some fierce opposition. On a trip in very wet weather at the start of January 2005 the sump started to make its usual glooping noises which were duly ignored. However what could not be ignored was the regular Tsunami of a flood pulse it delivered shortly afterwards. Roy who was caught in it said that water went right over the top his head almost instantaneously. Fortunately being at the junction with the dry dig he just about managed to scramble his way to safety. However in the process he swallowed some water and lost some kit.

Me and Roy also nearly managed to get squashed flat when a 20 foot section of roof decided to detach itself, the day after we had been crawling under it! After a fair bit of work we managed to clear a way to the downstream sump. This proved initially to be fairly spacious but when dived by Martin Groves it closed down after a short distance. Martin also dived the upstream sump, and this also closed down.

Our two main leads were now gone. What could we do now? We decided to climb the aven back in the main passage. Unfortunately, we were to have no luck here and this closed down as well. There is a draught at the top and, due to the proximity to the surface, it seems likely that it is associated with other nearby cave sites such as Ogof Gorllewinol Cader Fawr.

Personally I do not think that Brown Porridge should be totally written off. There are still a number of digs within the cave that may produce results. The main mystery remaining is that on placing dye in the stream on the surface we did not see it within the cave, even after several hours' wait. As the stream in Tsunami passage is larger than the stream which sinks at the surface it seems likely the cave draws water from a wide area.

Since I wrote about this cave in Pelobates 82, various developments have occurred. Most importantly we have gained an upper entrance to Nant Rhin. This is the one that Mike Green said might exist, when after exploring the cave from the inside upwards, he heard the sound of a lawn mower on the surface.

It would have been almost impossible to track down this entrance without a draught test carried out by Roy Morgan from the bottom entrance. After this positive draught test Roy began initial digging work. On a mammoth all day session Tony, Roy and myself gained the small passage originally entered by Mike Green and friends many years ago.

The cave slightly downstream of the new entrance to Nant Rhin has been named Nant Hafod pot. These passages were pursued by Tony Copeland to a point where he said he had a view down a pitch into new territory. He certainly did not recognise it as being anything he knew in Nant Rhin. As Tony Copeland is extremely small and pushy, some form of enlargement will need to follow. Looking at the survey it seems likely that Nant Hafod pot is not associated with the passages at the top of Aven d'Oznog but is linked to the eastern branch of the system which end in the 'Kerplunk!' and 'Jaws of Death' digs. Obviously there is more work to do here.