A dig was recently carried out by Mike Green, Ashley Dickenson, Helen Tredwell and myself, the aim of which was to enlarge the draughting tube at the end of the series of passages below Twin Peaks chamber (see X on survey). The discovery of these passages, which included a second pitch and a chamber below, are detailed in Descent. The impetus to dig this tube was due to the fact that the small stream which flowed in the new series had been traced to Ffynnon Gisfaen, a major rising in the Clydach Gorge, some 7 km distance.

After several trips we had 30 feet of a horrible flat out thrutch in water with a viscious 90 degree bend half way along. Straight ahead the tube carrying the stream closed down to approximately 4 to 5 inches, while a body-sized choked aven rose above. It was noticed at this point that most of the draught seemed to eminate from this aven. However, as everybody was fired up with the idea of following the stream to Ffynnon Gisfaen, this was ignored.

The continuation carrying the stream was then banged to gain a small chamber. I say small as the chamber could only hold three extremely friendly people at a push. The continuation from the chamber led off as you can probably guess in an extremely tight body-sized tube. The attempt there on to follow the stream can best be described as not the most enjoyable caving I have undertaken. However, a wallow flat out in water getting bloddy cold setting up a charge, then reversing out feet first hoping you do not pull out the detenators or get irretrievably stuck probably sums it up.

Numerous masochistic trips later we had about 150 feet of passage fit for a dwarf contortionist and a point had been reached where the stream sloped off into a no hope bedding plane some 2 to 3 inches high. The bizarre thing was that Ashley actually managed to get me to come and help him survey it the following week.

What were we to do now? Fortunately, logic reared its head at this point - in order to find cave passage it helps to follow a draught. So finally it was decided to attack the draughting aven.

A bit of chemical persuasion later, things were starting to look a bit better. Wriggling to the top of the formally choked aven, a small hole had appeared. Sticking my head and some of my shoulders through the hole gave me a view of a small chamber. At last out of the confines of that horrible tube, I thought to myself as I began to wriggle and thrutch around a bit in an attempt to pass a boulder which was blocking my exit from the hole. And then as my head twisted and turned, I spotted something which knocked my enthusiasm back a few notches. There some 15 feet above me lurked a whole nest of grand piano sized boulders piled precariously against the one solid wall. The 'sitting duck' feeling was pretty acute. However, I did manage to set up a charge on the boulder partially blocking the hole and then beat a hasty retreat. Back on the surface it was agreed with Ashley that boulders that size don't appear from nowhere. Obviously they had collapsed from an as yet unentered part of the cave above.

Enthusing to Mike on the telephone about the latest developments and also managing to skirt around the bit about large boulders, I managed to arrange another visit the next weekend. During the week, I also had plenty of time to think about possible outcomes, all of which centred on the theme that we managed to squeeze up between the large blocks and entered a large passage above. However, I might have known that dreams never come true especially when you are dealing with caves, for when Mike reached the top of the aven the following weekend, he quickly informed me that the hole I had stuck my head through was no longer in existence due to boulder collapse. He also told me that although the boulders were not too big - a bit bigger than football sized - he did not want to try and push them out of the way as there was a distinct possibility that they would drop on his head. The only solution we could come up with was to put some charges on the bottom of the boulders and attempt to force a way through by almost atomizing them.

The charges were duly set off and after a while spent waiting for the fumes to disperse, I slunk back in to review our handy work. The result was to say the least very disappointing. Somehow, the number of boulders blocking the hole had multiplied and they had also increased in size. There had been another collapse. What was more unnerving, at this point I managed to convince myself that the solid wall was in fact a big 'strawberry jam job' boulder which had been moved by the explosion. We left the cave in some despondency as it was agreed that further progress would not be possible without installing some kind of shoring.

As could be expected, an immediate return was not made. However, a few months later saw the usual crew plus Paul Stacey cursing our bodies to the end of the cave. Clutching a few token bits of wood, Mike was the first into the dig to try to shore up the big boulder. A few swear words and clanging sounds later, he informed us that the boulder was now reasonably well proped up. He then told us that he was going to set up a charge which would hopefully see us through the obstruction this time. I just hoped we were not in a 'horn of plenty' situation where more boulders would be shaken to the bottom of the hole.

After the charge had been set off, it was Paul's turn to return to see what had happened. I bet it has all fallen down I thought to myself. But this time we had been lucky, for although Mike's shoring had been blown out of position, no more boulders had collapsed onto the top of the aven, and those that had been perched over the top were broken up to the point that Paul thought he might be able to manoeuvre them out of the way.

Fifteen minutes of nerve wracking rumbling sounds later, Paul informed us that he was going to have a go at trying to get through. After a few minutes, assuming that he had not been squashed flat, I asked Paul what the chamber was like.

"What chamber?" he replied. "There's only just about enough room for me and nothing else!"

"Are you going to be able to get up between the boulders in the roof?"

"I doubt it. There's some huge boulders up here and I don't want to mess around with them."

Obviously I wasn't wrong about the piano sized boulders!

That was enough adrenalin for one day, and we exited the cave. Back in the car park, I suggested that the whole tube prior to the aven needed opening up in order to alleviate the 'sitting duck' feeling, and that some form of scaffolding cage should be constructed up into the boulder ruckle. However, as I write this, I know nobody who has been back to this point. I suppose everybody's enthusiasm was waring a bit thin.

A trip was made into the cave a few months ago with Toby Stewart, but he refused point blank to go anywhere near the horrible aquatic tube which leads to the aven. The main aim of the trip was to try and bypass the tube by digging out a rift just before it, but it quickly pinched in. However, the trip was not a total waste of time, as we managed to engineer a bypass to the first aven when Toby rather dramatically kicked some boulders into a rift adjoining the pitch and free climbed his way to the bottom. A sling would be required half way up the pitch to make this an easy option for all concerned. The ladder from the second pitch was also removed as it was suffering from severe abrasion.

Based on the strong draught which exists at the end of Blaen Onneu Quarry Pot, more cave passage is certainly waiting to be discovered. However, with the relative ease with which new finds are currently being made in Carno Adit Cave, it will probably be easier to find some passage trending towards Blaen Onneu Quarry Pot from here and make the connection in this way. 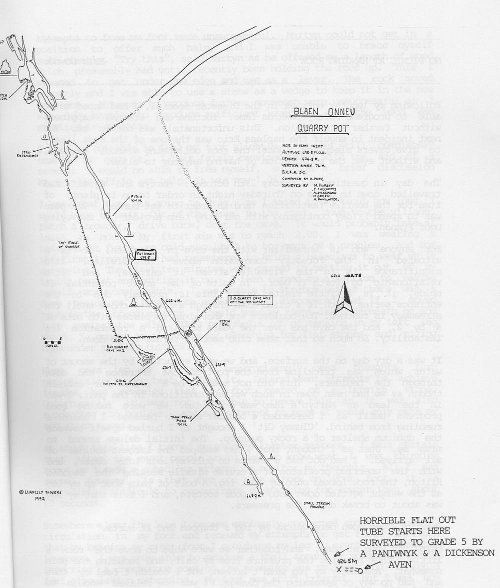 Author:
Adrian Paniwnyk
‹ Newsdesk up No Picnic at Hanging Rock ›