Letters To The Editor

I would like to inform the club of the following information:

Whilst leading a group of cavers from another club across Pant Mawr after exiting Pant Mawr Pot, the group was spotted and cross-examined by a gentleman and his shooting party. Unfortunately a member of the group was carrying a broken stat. This did not escape the attention of the shooting party who choose not to mention it to us.

Two days later I received a phone call and all sorts of threats were made regarding future access. For this I can only apologise to the club and its officers for any inconvenience. I have since decided not to return to any cave controlled by the Nature Conservancy Council's access officer.

The person who removed the broken stal and the other person who carried it across the moor are aware of my decision. However, if I am leading a trip, I don't feel it is for me to 'boss people about'. I believe that an individual's behaviour is up to their own concience unless they are endangering the lives of others.

The stal was already broken and no member of the party did or ever would deliberately break anything in a cave.

I read with interest the article by Adrian Paniwnyk in Pelobates No 67 about his trip to Hagg Gill Pot. Please find enclosed a recent grade B survey of this cave.

I was a bit puzzled by Adrian's account as to which route he took. He recalls that they passed 'Helectite Rift' and that they had to traverse the rift. If this is so I think that they must have taken the alternative route past 'Rumpty Tumpty' to 'Cobble Chamber' where the cave does get tight and a long traverse in the roof is required to reach 'Moonmilk Corner'.

The entrance into 'Shatter Pot' is now stable. At the foot of the ladder, the way on is to the left into 'Arch Chamber' through the 'Window', a 3m climb down to join the main stream passage. Left and downstream quickly leads to sump 1; right and upstream is the way on to 'Engineers Chamber'. This is recognised by the large amounts of black siphon tubes left lying about. The main stream is followed to the left of this, soon closing down to a calcited duck. This is where the traverse in the roof is required to reach 'Cobble Chamber' where the cave starts to reach the shale boundary at 'Moonmilk Corner', 'Thieves Chamber' and 'Waterfall Chamber'.

I last visited Hagg Gill Pot in November 1994 on a photographic trip, and even though it is not an extensive system, it still took me thirteen hours underground to photograph it all. As to the report in Descent Magazine about formation damage, I think that this is probably an overstatement. The helictites and straws are still there. However, I do recommend a trip into the 'Mayday Series' where all the straws are still intact, some upto 3m in length, with gour pools, stal columns, etc.

I hope that Adrian does visit Hagg Gill Pot again, as do other members of your club. I feel it is a worthwhile trip if you are in the dales. If I can be of any service to you or your club regarding systems in Derbyshire, please do not hesitate to contact me. 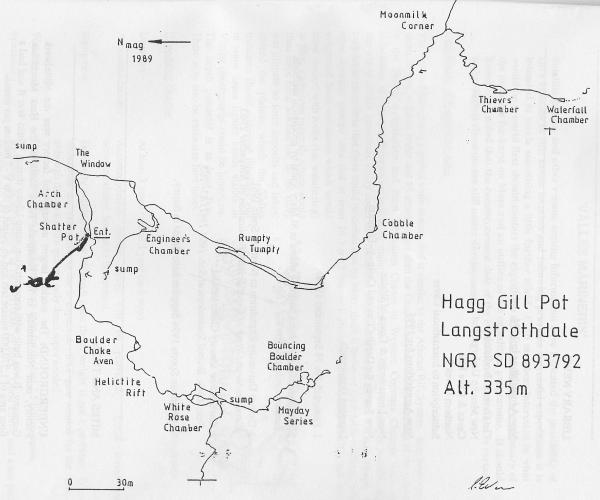