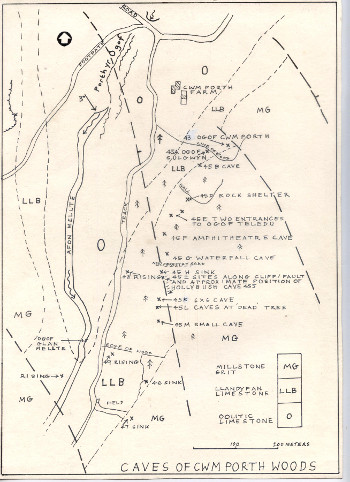 Cwm Porth Caverns constitute a classic series of caves formed under the gritstone cap rock.
The caves are of a classic unconformity type and are characterised by collapse features with overhanging gritstone cliffs on the east side and a jumble of boulders in the base. These collapse dolines form the entrances to the caves. In most cases the cavities associated with them are fairly insignificant. However, some of them interconnect, thus forming large size passages up to 60m long.

Drip water collecting in the caves seeps away through boulders and blind shafts and Lloyd (18) points out lines of drainage from these caves is still not clear. He says that dye put into Waterfall Cave (see below) in flood conditions was traced to resurgences 48 and 49. However, in dry conditions the course taken by water sinking at Waterfall Cave, when resurgences 48 and 49 are dry is not known. As well, as this the sink at 47 is very close to where the limestone runs out and there is no clear point for its resurgence. Gascoine in Ref. 40 page 50 states that Waterfall Cave in flood conditions has been dye -traced to Porth-yr-Ogof between Sumps 4 and 7, while Cwm Porth Cave (Cwm Porth Farm Well Cave) has been traced to Porth-yr-Ogof in the region of Sump 10.(Cwm Porth Inlet) Possibly water is conducted up dip along a fault which passes through Cwm Porth Woods to Porth yr Ogof.

The main study of the Cwm Porth Woods Caves was carried out by Burke (Ref.9) in the 1960's. However, looking at the surveys in Burke's article it is almost impossible to relate the surveys to what is actually seen on the ground or even work out which survey relates to what cave. The main aim of this investigation is to provide some rough, but hopefully, clearer surveys and also provide some descriptions of the caves visited. It would be interesting to compare my sketch surveys to more accurate surveys if carried out. All photos are taken by the author unless otherwise stated.

45A Ogof Sulgwyn - Translation is Whitsuntide Cave. (U)

NGR SN 92935 12102 Alt. 294M
Two cave entrances can be found by ascending the footpath that runs between Cwm Porth Farm and the northern edge of Cwm Porth wood, until a large white quartzite block is reached. At this point enter the wood, the entrances are situated in a shakehole approximately 15 metres to the south. The north east entrance according to the Cambrian Cave Registry leads to a crawl in a tight bedding plane. 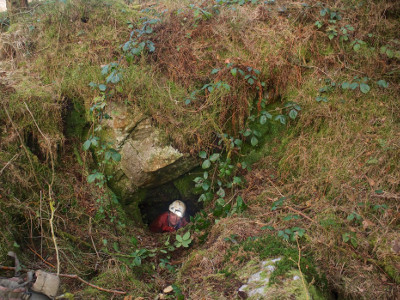 The south east entrance leads down a steep slope (see photo) to a chamber approximately 5m in diameter and 4m high, containing well fluted pot in the base. This cave was discovered by F. Baguley , P. Bird et.al during Whitsun 1963.

NGR SN 92918 12078 Alt.
A hole drops into small chamber made up of gritstone blocks. Not descended as on solo visit. There are the remains of camp and tilly light nearby. 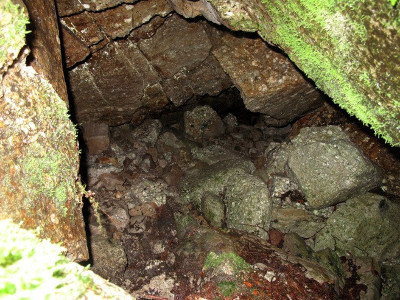 Figure 2: View down through entrance to chamber with boulders 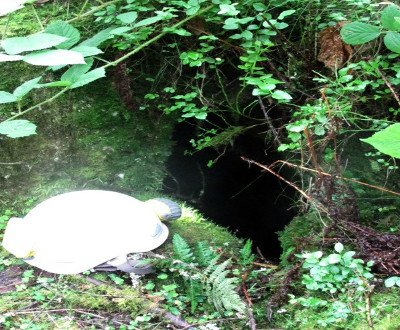 NGR SN.............
At the northern end of a long shallow depression, near an uprooted tree, it is possible to squeeze diagonally down into a rift with much shattered gritstone rock. It quickly gets too tight for the author.

At the southern end of the depression there is drippy collapse feature with no cave accessible at present – see photos below. 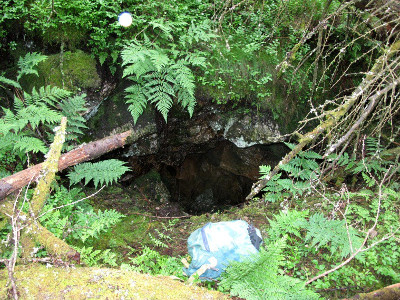 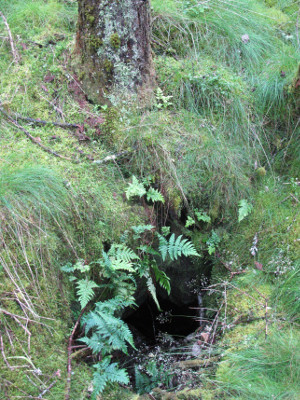 NGR SN 92887 11996 Alt. 293M
Stream cascades over cliff which runs north/south and sinks amongst boulders at it's base. No cave accessible at present. There is a tumbledown wall nearby. This is site G on the ogof.org.uk site produced by Brendan Marris 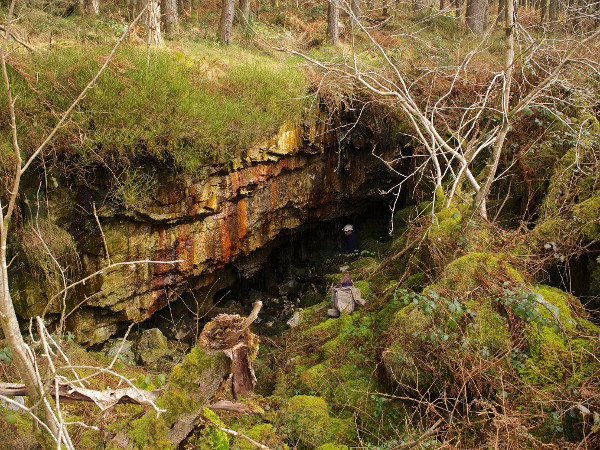 This is almost certainly the most extensive cave discovered in the wood. 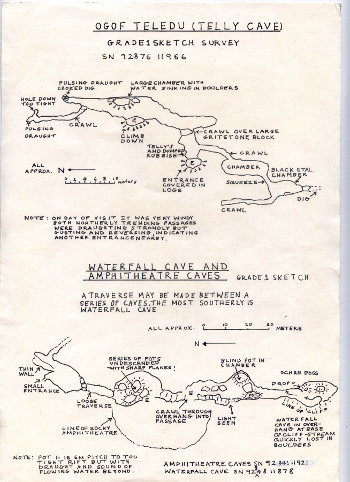 Entrance climb of 2 to 3 meters leads to a large boulder strewn chamber. A 10m rope tied round a nearby tree is useful for descending the entrance climb. At the lowest point in the chamber water sinks amongst boulders in the floor with no apparent way on. From the chamber, a northerly trending passage diminishes to walking size and then chokes. This choke has a pulsing draught which seems to suggest another entrance nearby. A low flat out passage leads off on the left of the northerly trending passage. This quickly ends in a descending rift again with a pulsing draught but is too tight to follow. Also half way along the flat out crawl there is a small hole on the left which emits a strong pulsing draught, possibly associated with the choke previously mentioned-see survey.

Back in the entrance chamber in a southerly direction it is possible to scramble over numerous blocks to a point where the passage appears to choke. Just back from here it is possible to crawl round the side of a gritstone boulder to a small chamber where much rubbish has been thrown down another entrance shaft - Site I in Marris.

The 'rubbish' includes the remains of at least two early television sets. A fragment of ceramic with a young looking Queen Elizabeth was amongst the rubbish so a possible date for the dumping of the rubbish might be the 1960's. The shaft entrance down which the rubbish was thrown is covered with tree trunks and can be hardly seen on the surface.

A crawl leads off the rubbish strewn chamber to gain another chamber fortunately with no rubbish.

From here a low flat out crawl gains another chamber this one containing much black stal. At the end it is possible to squeeze over a black calcite slope where the passage ends in a dig. Back in the black stal chamber it is possible to crawl into another flat out passage which appears to head back towards the entrance. 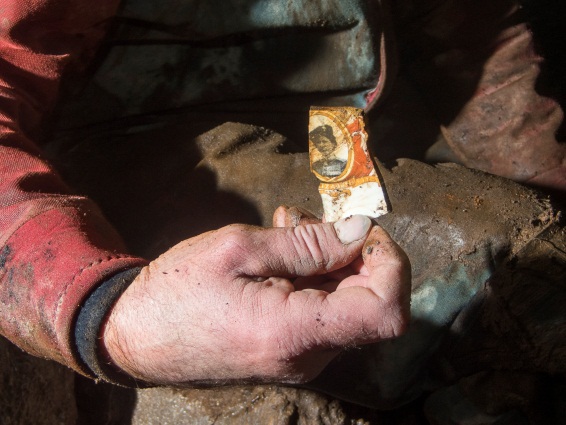 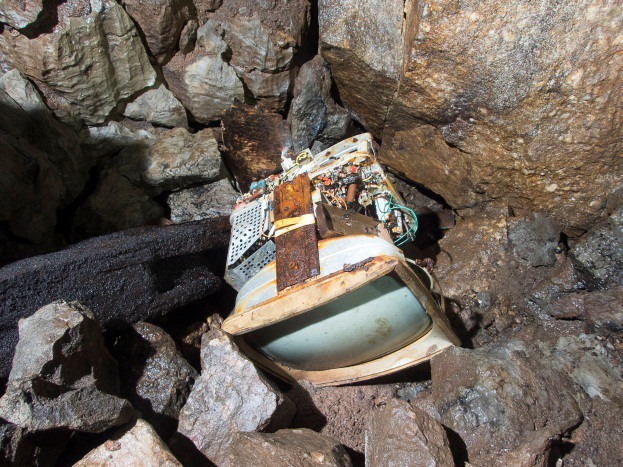 NGR SN 92841 11921 Alt.281m
Cave A in Marris's ogof.org.uk, Ockenden site A, Burke OP, Lloyd site 13
There are two entrances situated in the overhang of a low cliff which runs approximately north-south. There is a large boulder strewn depression in front of the entrances from which the caves get their names.

The first large northerly entrance leads to a spacious chamber into which much light penetrates. The floor of this chamber is divided up with a series of sharp projecting flakes with undescended shafts in between- Wales answer to Pinnacle Karst? The rock is very sharp and loose and care must be taken when exploring this area. To the north of this area a loose traverse over a 5 meter deep pit gains another chamber, where light penetrates in from another very tight entrance. In the back of this chamber, where there is a thin limestone partitioning wall, it is possible to enter a low crawling passage which appears to end after a short distance.

The second less obvious crawling size entrance in the overhang quickly leads to a walking size passage where much collapsed grit must be climbed over. Half way along the passage on the left there is a chamber with a large blind pit in the floor. Further clambering over gritstone blocks leads where the passage lowers back to daylight and a connection with Waterfall Cave- see below and survey. 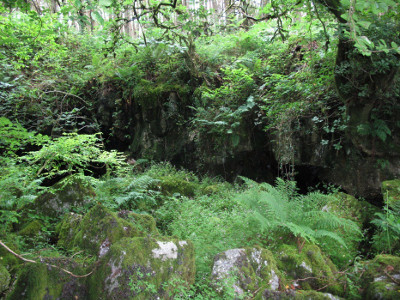 Figure 9: Entrances to Amphitheatre Cave at base of cliff

Cave B in Marris's ogof.org.uk, Ockenden site B, Burke MN, Lloyd 12
According to Lloyd “this is the only one easy to find you stumble on the stream out in the open and follow it down.” The stream falls over a low cliff and enters a crawling size overhang region. It is, however, quickly lost amongst a jumble of boulders. Continuing to the north of here is the start of the passage which connects to Amphitheatre Cave. 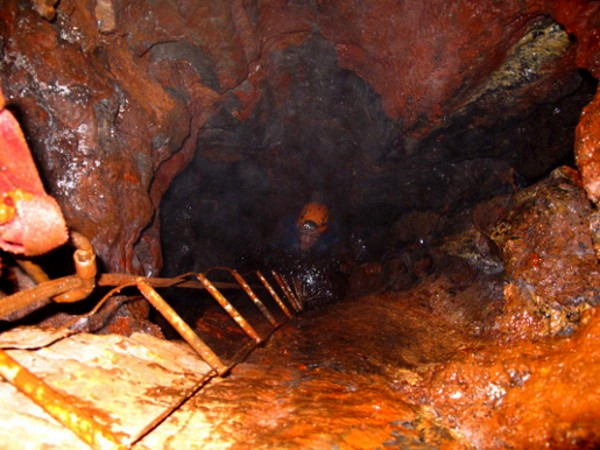 Back to the south where the stream enters the overhang there is a 6 meter deep pothole to one side of an ochre boss. It seems entirely likely that the stream used to descend this pot in the past. At the base of the pitch there is a too tight rift which possesses a draught and through which the stream can be heard. Back at the top of the pitch on the other side of the ochre boss pebbles may be thrown through a small hole which then clatter down a drop. As mentioned previously the stream which sinks here has been traced to the resurgences at sites 48 and 49 and also Porth yr Ogof.

Slightly to the south of the entrance of Waterfall Cave a wide forestry track has recently been driven.

Wet weather sink to south of forestry track where wood is being cleared. 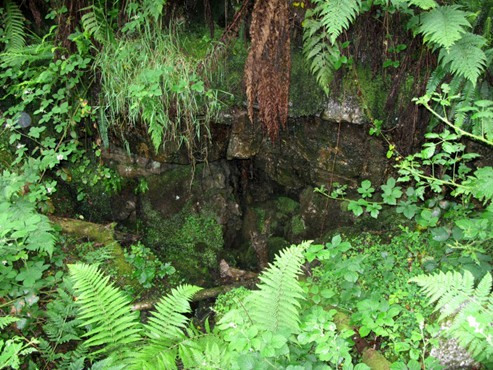 45I Sites along cliff face

Various sites have been noticed at the base of a cliff that is about 30 meters long. The cliff marks the line of a fault which passes through Cwm Porth woods –see area map. Further work has still
to be done here with a few features needing investigation – see sketch survey.

At the southern end of the cliff previously mentioned is the entrance to the cave that Lloyd calls Hollybush cave. Belaying a ladder to the Hollybush / tree a 3-4 meter climb down past a large jammed block can be made .At the base of the pitch a muddy squeeze gains another chamber and passage. After a short distance a traverse over a pitch (undescended) and another short section of passage allows the explorer to regain the surface where a handy tree root is positioned in the entrance.
From this entrance it is also possible to climb down into another small chamber to the south- see sketch survey. Bearing to the left a chamber with jammed in boulders on its right side can be entered. However, on the left it is possible to climb into a narrow oversuit wrecking rift Fortunately, the passage enlarges to where the back of the boulder choke previously mentioned can be viewed. After a short distance of crawling it is possible squeeze under a block to reach the 6x6 meter chamber and entrance described directly below.

Entrance drop leads to chamber which Lloyd describes as being 6x6m wide and height 3m. Down on the north side of this chamber is the boulder squeeze and passage beyond which leads to the tree root entrance of Hollybush Cave. 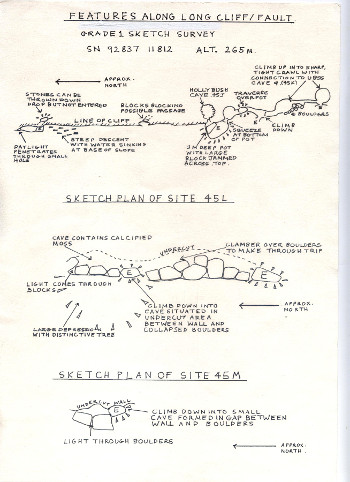 On the north side of the depression a hole down between boulders leads to a short section of passage, formed as an undercut between the solid cliff wall and foundered blocks. The passage contains calcified moss and snotalite?

On the south side of the depression, it is possible to enter another entrance and then clamber under and over boulders to gain a spacious chamber and a climb up to another entrance –see sketch survey.

On the surface presumably above the 20 meters passage previously is another boulder filled hole which must be very close to this passage.

Hole drops into small chamber formed by undercut of limestone wall and boulder collapse on the other side- see sketch survey. Slightly to the south of here is a wet weather sink surrounded by much grass and ferns with no cave accessible at present. This site is not mentioned by either Lloyd or Ockenden.