This was my second year going on this club trip and once again base camp was established at Alan and Janet's country retreat in the heart of the Forest of Dean. Tents were erected on the front lawn before heading off to the `wonky donkey' for evening refreshment. This meant that there were no `wonky' tents to admire on Saturday morning this year.

The sun enforced an early rise, failure to rise meant you were cooked in your tent. This of course did not lead to an early trip down a cave; we are after all Croydon... Over and after breakfast many discussions were had as to where we would head in our featured cave for the weekend `Slaughter Streamway' or `Wet Sink' to some. Results of the discussion were
highly detailed: we'll turn left or right when we get to the stream way, it had only taken us one and a half hours to decide this!

Heading to the nearest parking spot to the cave we found it invaded by lots of teenagers out on a hiking / orienteering
trek. They did not appear to appreciate our fine caving physiques as we got changed and soon moved on; let's hope there was no permanent trauma for them. Our arrival at the cave entrance was a welcome relief as it was a very hot day; not one to be wandering around in a furry suit, let alone the rest of your caving gear. 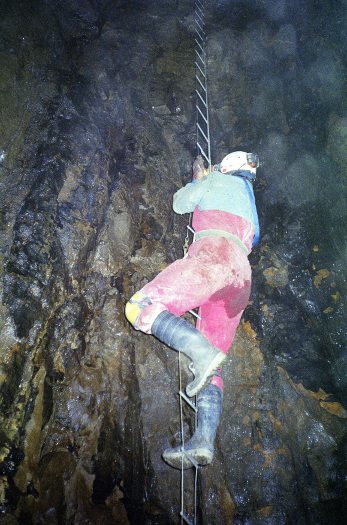 The cave itself has all the technical bits first. The descent was done via a series of fixed ladders in quick succession, the only interlude being a short crawl and `mouse aven', which apparently this time contained a dead vole. A short climb down after this led to the main course, a 10-12m (depending on the guide book read) ladder pitch down to the stream l
evel. With us all down safely a decision was finally made and we headed off down-stream. We followed this for some fair
distance, leaving it at Sump 1 and rejoining again after Sump 2 via a dry route. By the time we got down to Sump 3 the general consensus was to turn around and try to complete the round trip by following one of the side passages we had seen earlier.

This would be a good point at which to mention that our only reference material down the cave were people's memories (notoriously vague) and a quick, scaled-down drawing of the cave survey onto a post-it size piece of paper. Full credit to
Steve for it being accurate (he is after all the librarian) but it was rather susceptible to water. After some fumbling
around at the upper end of coal seam passage, we emerged into the upper levels of the Chunnel. Here we found that the route for the round trip was clearly marked, if only we had been going the other way round!  The weekend's surreal momentthen happened.

We were once again fumbling around trying to complete the round trip and rejoin the streamway. The words `a decent survey would help here' were spoken, to which the reply was `here's one on this rock!'. Sure enough there was, albeit rather damp, a detailed survey of the cave careful y folded up on a nearby rock (it was far better than any in the guide books). A quick look at this got us back on our way and to the bottom of the ladder pitch again. 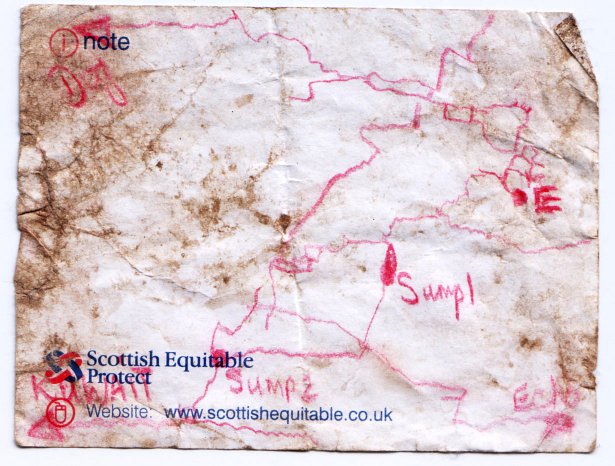 At this point Andy, having had all the fun of abseiling in on his SRT gear, had the less pleasant task of ascending said rope first to belay the rest of us up the ladder pitch. At the top of the pitch there seemed to be as many ways off the ladder onto the top ledge as there were cavers. Let it not be said that caving does not allow freedom of expression. With the ladders and rope stowed away it was a short trip up the fixed ladders to return to the surface and the full heat of the day.  Having got changed we did have some difficulty in finding a watering hole open in the middle of the afternoon. However, finally refreshed we headed back to base camp for an evening barbecue and, of course, more refreshment.

Sunday morning start was just as early and rumours of a dig were going round. Doubts about the caving potential of the dig were later confirmed. Once finished the dig consisted of a trench approx 18ft long by 2 ft deep and looked suspiciously like a trench for concrete foundations. Various objects of high archaeological interest were uncovered and wil  be donated to the regional museum.

After suitable refreshment (of the non-alcoholic type) we set off for an afternoon's walk visiting several old mines and
quarry workings up the Bix Slade. We did a brief pirate trip down Bix Slade Stone Mine, which after the smal  entrance
passage is huge inside - very impressive.

With our clothes suitably muddy we retuned to the cars before setting off on our various journeys home.

The magnificent 7 cavers present were: Neil Montgomery, Chris Crowley, Steve Murray, Andy Todd, Adrian Paniwnyk, Alan Ockenden, Rob Damon, and not forgetting Janet who kept us all in order for the weekend. Many thanks for letting us stay at your house for the weekend.